A Second Helping of Blessing, Please 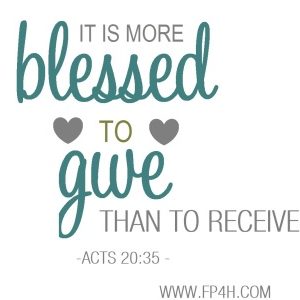 We live in an intense, driven and demanding world. It can be relentless to just stay even, not to mention what it takes to get ahead. Changes in the workplace, new fears in society, swirling demands on raising children, and then the exhaustion of just doing the right thing, for us are contributors to our feeling overwhelmed. It makes me tired just to think about it. And to add to the energy drain is the negative atmosphere that seems to permeate our entire environment. People want more of my time, my resources – more of me – and what I give seldom seems good enough.

Where can I get more of what it takes just to be?

I need a second serving of BLESSING, and yes you can “jumbo size” it. Being overextended causes feelings of exhaustion, if we do not have healthy portions of   energy boosting blessings. Finding ourselves stretched to the breaking point often causes feelings of unworthiness and inadequacy.

Great challenges can be a source of being overwhelmed and insecure. We find in II Kings 2:9 the cry of Elisha who felt that he was not “up to the job” of being the Prophet of God. He begged the aged, now departing Prophet Elijah to not leave until one last request was granted: “Please let a double portion of your spirit be upon me.” To do his job Elisha knew he would need more than he had – he needed what Elijah had.

There are many times that we wish we could have the wisdom of some of the great people God has brought our way. If only we had what they had. If only we had what we used to have! Recently, I visited with a student who was very discouraged because of events back home that were dramatically impacting her life at the university. We spent some time on the problem, but then I encouraged the student to talk about when life worked better. She recalled a time that had many of the same painful struggles in the home, but she did things that gave her strength. We spent the next two visits talking only about what worked in the past and how to make them work in the present. They included: an honest accountability partner, systematic Bible study, simple prayers and taking care of herself physically. She assured me she planned to start soon. I would NOT settle for “planned” and insisted on a “plan.”   She started that afternoon to reconstruct her success plan. Her blessing was part of her past and the people God had given her. She needed to go back to the place where blessings were being served.

Eating out is difficult for people who want to eat healthly. Going to a fast food restaurant that specializes in fat, fried foods is an unlikely place to find heart healthy choices. If we go to places where blessings are not served on a regular basis, we should not be surprised when we gain that unwanted weight of discouragement.   Often, we have to go to unhealthy places but we do not have to eat what is served.

An amazing thing happened when this university student restarted the healthy regimen others had modeled for her and with which she had great success in the past – she not only felt the power of being blessed, but had extra to give away. That weekend she was with a friend who was encountering the trauma of a family crisis and was able to share with this troubled friend the things that helped her in her terrible time of hurt. Instead of this being a drain, it was energizing.

Jesus said …it is more blessed to give than receive. Acts 20:35

But you can’t give what you don’t have!
Soooo get another helping of blessing – go ahead – SUPER SIZE IT.

Dr. William Heston attended  Howard Payne University, followed by M.Div. at Southwestern Baptist Seminary and a D.Min. at Austin Presbyterian Seminary. Ministry positions have included serving as youth pastor, discipleship pastor, Senior Pastor, Associate Pastor and Counseling and as VP of Development at Howard Payne University and later as Chaplain. He began at First Presbyterian in 2005 and was ordained as a PCUSA pastor in 2006.  He has also led seminars at First Place e Health Conferences.