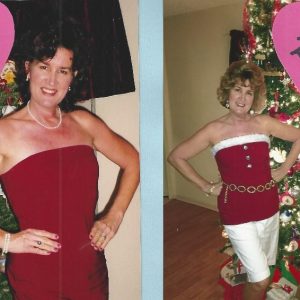 “Before FP4H, I was used to eating seconds (and sometimes thirds!), plus I would eat off my girls’ plates and also my husband’s. I couldn’t stand for good food to go to waste and it wound up on my WAIST!”

Although some people tell me now that I didn’t need to lose the weight, I knew in my heart that I did.  At 5′ 9″, I could sometimes hide the extra weight, but the big mirror in my master bathroom never lied.  Six months ago, I was 50 pounds heavier than when I first met my husband in 1990, and being a former beauty pageant queen, I often wondered if people were secretly thinking, “Does she know she’s gained all that weight?” I knew I wanted and needed to take the weight off, but I just kept telling myself that at 48 years old I would just have to settle for being called “Big Momma.” (And, yes, that is what some of my immediate family called me.)

It was my younger daughter that actually was the catalyst for change. Every time a weight loss commercial would come on TV, she would say, “Call them, Momma. Call them.” She’d even bring me the telephone while the number was still on the screen.  My response was always the same. “Maybe later.”

Summertime came and the minister’s wife, Kim, announced that she would be starting a First Place group in the fall and all those interested should contact her. In my mind, I responded, “Maybe later.”  However, my daughters went to Kim and told her I was interested in being in the class.  Later, when Kim approached me with the details of the class, I felt forced to sign up.  I couldn’t very well tell the minister’s wife no, now could I? Looking back, it was the best thing that could have happened to me!

Old habits die hard and the First Place program has helped me break those habits.  Before First Place, I was used to eating seconds (and sometimes thirds!), plus I would eat off my girls’ plates and also my husband’s. I couldn’t stand for good food to go to waste and it wound up on my WAIST!  It got to the point where my favorite place to shop was the grocery store!

Now through First Place, God gives me the willpower to eat in moderation and to choose healthy alternatives to high-fat foods.  Leftovers on others’ plates go in the garbage, not in me!  Today, I’ve lost 43 of those dreaded 50 pounds and going to the grocery store is more of a “mission” to discover another good food choice to replace those old fatty snacks. Now my favorite place to shop is where I can find a size six (6) to replace my size sixteen (16).

First Place has also given me the opportunity to share my faith in God many times over the last several months.  When the weight loss started to become visually evident, people began asking, “How did you do it?”  I’ve been able to share that “…with God, all things are possible.”

I also thank God for the closer friendships that have been made through my participation in First Place.  I share a special bond with all those other “big losers!” I especially thank God for the love and encouragement from my First Place leader, Kim Ellis. She helped me realize God’s healthy blessings for me.

Finally, as an added illustration of God’s work in my life, donuts have always been my absolute favorite treat and even now, I still have one from time to time. In the “old” days, a box of a dozen wouldn’t make it through the day. My disappointed family would always ask, “Who ate all the donuts?” knowing fully well it was Big Momma!  One recent Saturday morning, I smiled when I realized there were “still four donuts’ left from the dozen I purchased the Wednesday before…and I couldn’t eat them even if I wanted to because they were stale!  That, my friends, is just another of God’s First Place blessings in my life!