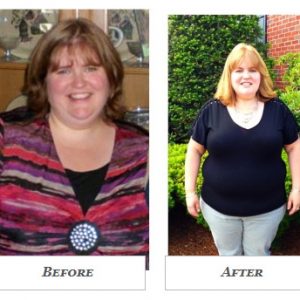 Are you thinking, “This is too hard for me and how will I ever lose so much weight?”  You are not alone! I have an ultimate goal to lose one-half of my body weight. This is a very large number and I have a long way to go, but I know that God is carrying me even when it seems too hard. If I really think about it and add up all the pounds I have lost in the past only to put them back on, I have probably lost more than I actually need to lose and keep off!

I lost 10 pounds on a diet my mom and I did when I was a teen and I gained it all back. As prom was approaching, I did Slim Fast and lost 20 lbs. to look good in my gown and then gained it all back plus more. There were multiple attempts at Weight Watchers; I lost 20-gained 30, lost 25-gained 40, lost 15-gained 25.  Using Phen-Fen, I lost 40 pounds, which was the most I had ever lost and was feeling pretty good until I had breathing and heart problems. I wound up in the ER having tests. The doctors said I had to stop medication. Shortly after my episode, the medication was taken off the market due to the side effects and lives lost. I am so thankful that God kept me safe!  As soon as I stopped the medication, I gained back at least 60 pounds. Then there was Herbalife, LA Weight Loss, RightSize Smoothies, and others.

I had given up completely, thinking I would just live with always being the heavy one. Fast forward a few years when the announcement was made during church about a new class starting for weight loss.  I had never heard of First Place 4 Health, but knew God was calling me to do this. When the classes began, I quickly read all of the books in the kit because I was all in.  I needed to get this right. I followed the program—tracking, exercising and doing the daily Bible studies.  I was losing weight and I loved my Thursday night group.

As the summer approached, I got off track and did not attend any meetings. Our Thursday night group was moving to Sunday morning, and I didn’t want to get up that early.  I thought I could do it on my own for the summer.  HUGE mistake!  I came back having gained almost all of what I had previously lost. I did not have the excitement as when I first started.  How would I ever look good with so much weight to lose?  So I half-heartedly attended the Sunday morning classes. I lost a little, but wasn’t totally into the program.

I realized that God was calling me to teach Sunday School in the fall. The downfall was that I couldn’t attend class anymore.  I thought I would follow the program on my own.  That did not happen. I was on a downward spiral, gaining and gaining; I did not know how to get back. Monique said they were going to meet at night for the summer and I decided I better go back to the class.

I knew I had gained a lot of weight and was too ashamed to step on the scale. I did not want to see the number and I certainly did not want anyone else to see it.  I went to classes for about five weeks before I actually got on the scale. During the summer, I volunteered for VBS and needed to sit on the floor with my class, but I couldn’t.  How embarrassing it was to not be able to get myself back up and then be in pain because of sitting on the floor.

I was horrified when I saw the photo of myself that was in the Sun Chronicle for the Better Together FP4H event and couldn’t believe how huge I looked. At the event on 9/10/11, a light bulb went off. I finally felt like “I got it!” Losing all this weight is not about me looking better; it is about being able to better serve God!  I need to be able to sit on the floor and talk with the kids I am teaching. I need to serve God with a body that is healthy enough to do the work.

I have made it to the first of my three 50 pound goals, and I look forward to hitting the next one in this coming year.  This is not my timing; it is Gods.  I have to follow His lead and be faithful to Him daily in order for Him to complete his good work in me. I can do all things through Christ who strengthens me (Philippians 4:13 NKJV).  Being confident of this very thing, that He who has begun a good work in you will complete it until the day of Jesus Christ (Philippians 1:6 NKJV).