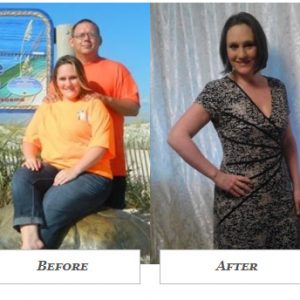 “Throughout this one-year journey, one thing that has somewhat been my motto is something said in a meeting: DO THE NEXT RIGHT THING.”

I was always active growing up, whether it was clogging (dance), color guard in the band, or volleyball. I was always involved in something that required exercise. I never had any issues with weight.  I stayed a decent weight and size, although at the time (with the typically teenage girl mindset) I didn’t view myself as a good size. My freshman year of high school, I was the “most fit” or “smallest” due to being in color guard AND dance that particular year.

After graduating high school, I married the love of my life. This summer we will celebrate our 14-year anniversary. During the past 14 years, we have welcomed four precious baby boys. Our first baby, Christopher, and we were ecstatic about our sweet baby. Sadly, two months and four days later on March 12, he passed away of SIDS.  God blessed us with Tyler on March 13, 2002. He blessed us again with Hunter on October 13, 2003. And once again, He blessed us with Aaron on October 27, 2005. I had gained weight with each pregnancy–well, I WAS eating for two! The problem is the fact that between pregnancies, I didn’t lose the “baby weight” and kept adding on to it.  AND when I wasn’t pregnant, I continued eating for two. My husband loved me the way I was, and I didn’t put much thought into what I was eating or the increasing size of my clothes.

Over the years, I attempted various diets and even Weight Watchers. I went to maybe two or three Weight Watchers’ meetings; so that was obviously unsuccessful. I had also tried other diets, in which I failed for various reasons. A lot of times when I would try a new diet, I would feel faint and I even passed out a couple of times, due to not eating right. I even tried a diet that consisted of eating two meals per day and the other two meals were shakes. That was not successful because 1) I didn’t see results and 2) I like to chew my food not drink it!

I would try to lose weight before going on vacation. One particular vacation comes to mind—the summer of 2011. My cousin was getting married in Louisiana, and then after attending her wedding we were leaving for a family vacation in Destin, Florida. I began trying to lose weight about three months prior to leaving for vacation. I had ordered a set of workout DVDs that I had seen advertised on an infomercial.  I was watching what I was eating and exercising with the videos. The weight was coming off and I was feelings great. Sounds wonderful, right? WRONG! I went into it with the wrong mindset. While I had a goal, it was short term and short lived. I told myself that I would diet and exercise until I left for vacation and that was it. I went back to my old habits. The weight came back on, plus some.  I didn’t realize this fact until the following summer (2012) when we took a family vacation at Orange Beach. I didn’t even realize the extent of my weight gain until we got home from vacation and were uploading pictures on the computer.  I actually loved the pictures, especially if my kids were standing in front of me and hiding me from the chest down. I still didn’t do anything about it. As a matter of fact, I continued eating the way I wanted.

My family (me, my husband, kids, mom, step-dad, and mother-in -aw) had been attending Crossgates Baptist Church in Brandon quite regularly.  FP4H was mentioned in the weekly guide for the upcoming session (January 2013). My mother-in-law was very interested for health reasons.  I told her that if she signed up, I would too. Ihad to take her so I might as well stay. I was excited about the Bible study, but wasn’t expecting to have any success with the weight. This was largely due to my past weight-loss failed attempts.

We attended the new member orientation and weighed that night. I weighed in at 210 pounds. The homework given was for us to eat exactly the way that we normally would, but to track our food. I did just that!  I ate at the China Buffet, hamburgers, fries, Dr Pepper (a lot), Reese’s and the list goes on. It was an eye opener! The leaders at FP4H began talking about making small/gradual changes. They also reminded us that we didn’t get like this overnight and to give it time. They asked us to give FP4H one year. I was thinking a year is a long time! Last month marked one year. I have lost 69.2 pounds and now weigh 140.8 pounds.

Throughout this one-year journey, one thing that has somewhat been my motto is something said in a meeting: DO THE NEXT RIGHT THING. Before FP4H, I would quit if I messed up. Now if I mess up at lunch, I know that I haven’t blown it; I just try to do better for supper.

I have also learned to love exercise again. I am now a member at a local gym where I exercise consistently.

The leaders and other members are very encouraging. They don’t judge you if you mess up; they encourage you to keep trying.

I have not only learned to eat more balanced meals and to exercise, but I have also learned to put all of my trust in God.  Proverbs 3:5-6 says, Trust in the Lord with all your heart, and lean not on your own understanding; in all your ways acknowledge Him, and He shall direct your paths. God has shown me multiple times not be anxious or worry: Therefore do not be anxious about tomorrow, for tomorrow will be anxious for itself. Sufficient for the day is its own trouble (Matthew 6:34).   He has given me peace when I needed it:  And the peace of God, which surpasses all understanding, will guard your hearts and minds in Christ Jesus (Philippians 4:7).

There is no way that I could have done this on my own and been successful.  Only with God’s helping and directing my paths and the support of FP4H have I been able to accomplish this.

Start Your Own Hope Story
On   /   Success Stories