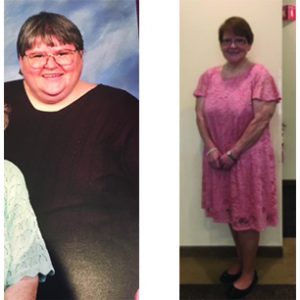 I have always been heavy. I was put on a diet in the first grade. By third grade, however, I was already one hundred pounds. As the years passed, I gained even more weight. By tenth grade, I tipped the scale at two hundred pounds. I would gain and lose weight during the years that followed.

I hit my highest weight in the year 2000. I was devastated. I weighed three hundred thirty-seven pounds. I worked in an office and part of my job required me to stand at a copy machine to copy images of checks. I had a hard time standing for any length of time and my legs would ache. When it was time to go to lunch with friends, we would go across the street for pizza. I would have to stop to catch my breath and rest twice before I could reach the pizza parlor. I even had to adjust the way I slept. Sleeping required two pillows to keep my head upright and a fan blowing directly at my face in order for me to breathe. In light of the circumstances with my health, I decided to undergo gastric bypass surgery. I lost a lot of weight as a result, but I had major complications from the surgery. I had a severe infection which required me to be attached to a machine to heal me from the infection and allow my wound to heal. After two years, I had gained back about forty-five of the pounds I had lost. Hoping to lose the weight, I joined Weight Watchers yet again. I had little results and was struggling. At this point in my life, I was caring for my elderly mother and life was not easy. Balancing working and trying to care for her proved to be my undoing. My compulsion to use food to numb the pain proved to be a powerful force during this season. I gained even more weight.

In 2007, I decided I needed a boost and that having a second bypass surgery would solve my problem. After surgery, an accidental tear was made to the new stomach. I ended up in the hospital for an entire month. Because of the tear to the stomach, I could not have anything to eat or drink until the tear healed on its own. I did get down to two hundred pounds, but not without sacrifice. To make matters worse, by 2009 I was back to two hundred forty-five pounds.

God let me have my way. I tried everything and nothing was working. I remembered one program that had worked for me. It was called First Place. I began to pray that God would help me to find a class. There had been no classes in the area I lived in for several years. I decided to go on the web to see if that might have changed. I was pleasantly surprised when I found there was a class in Wakefield. I live in the next town over.

I attended about five sessions before I really started losing weight. God had some major work to do in me before that could take place. I did not love myself. I hated the way I looked and had an awful problem believing in my self-worth. He spent those five sessions showing me how much He loved me and His desire for me to love Him by loving myself. It was only after this process was accomplished that I could truly embrace the other aspects of the First Place for Health program. I had been doing it my way. I now wanted to do things God’s way. I realized I wanted God to show me who He created me to be. I knew He did not create me to be the woman I saw in that mirror. I chose to believe that the God who created me knew how I was supposed to look and that He could help me be that way. I wanted the abundant life that He wanted for me.

In January of 2017, at two hundred twenty-eight pounds, I began again and continued my weight loss journey. God has been doing some amazing things in my life in the past year and a half. I went from no exercise to walking five miles, five times a week. I have lost most of the weight I need to lose and expect to reach my life weight goal soon. I never dreamed it would be possible. It would not have been possible without First Place for Health and the leaders and friends who cheered me on. I did not do this on my own. Throughout it all, God was there loving me, teaching me and equipping me for my journey.

I can do all things through Him who gives me strength. Philippians 4:13.