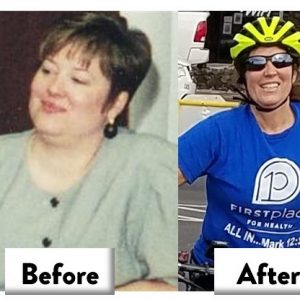 It took me 46 years to admit this. Everyone could see my fat, but I hid from mirrors, cameras and anything that might have revealed the truth of my situation. I was far from Hollywood’s ideal, ultrathin woman. Yet I rationalized: What is the harm of being the big woman anyway? Who doesn’t like a big paycheck, big car, big house, big-screen TV? In our modern world, bigger is better, right?

One day in 2004, I was flying to New York City for an important client visit, when I found myself unable to wriggle and squirm into the airplane seat. I thought it was some kind of trick on the part of the airline industry. Were they making the seats smaller? Did they shrink the size of the seatbelts? At a dress size 3X, the belt couldn’t reach the clasp across my lap. Embarrassed, I asked the flight attendant to quietly slip me a seatbelt extender.

Up until this “get real” moment on the airplane, I had consistently fallen short and failed at the battle of the bulge. While I couldn’t seem to regularly maintain a healthy weight, I had enjoyed many short-term successes. My weight chart looked like the Dow Jones: up, down, up, up, down, up, up, down and always back up no matter what I tried.

Finally, at the age of 35, no longer able to hide from myself that I was obese, I gave up and moved onto other priorities in life. Aside from this struggle, I had a lot to be thankful for, including a wonderful husband, Vince, who loves me just as I am, fat or thin. His career as a contract engineer had us relocating all over the country, and with each impending move, I lost weight then gained it back after we settled in a new location. It was fun to reinvent our lives with each relocation, but this issue of being overweight followed me wherever we went. In spite of being loved and supported by Vince and other friends and family members, I felt powerless.  Like so many others who struggle with weight, I tried everything: starvation in college, Weight Watchers before my wedding, diet pills after my first child, and Weight Watchers again after my second child when the scale tipped over 200 pounds.

I struggled with the disciplines of Weight Watchers. I felt dejected when I attended meetings in which my weight went up on the scale, not down. I would avoid the scale for weeks, only to be filled with dread, then heartbroken when I finally stepped onto it and saw a number that I would swear would be the highest I’d ever weigh. I’d return to my medical doctor from time to time, but the drugs he prescribed worked only as long as I took them. (Yes, I am part of the Fen-Phen disaster.) I have lost 40 to 50 pounds so many times that totally, I’ve probably dropped a staggering 450 pounds (the size of three people). I’ve honestly lost track. Each time I’d get frustrated, quit and the weight would return with a few added pounds.

Eventually, I began to feel the physical effects of carrying extra weight. The more I ate, the more my lower body screamed in pain. My feet ached. My ankles and knees became enlarged and swollen. In response, I limited my physical activity to prevent the pain that was certain to follow. It became a vicious downward spiral. One day, thinking that I could have a little fun, I strained a leg muscle bowling duckpins with Vince and my sons. For weeks, I favored my left leg. Eventually, I could no longer walk.

The physical therapist discovered that my leg muscles had tightened in the wrong places and pulled my kneecap out of place. It took three months to strengthen my leg enough that I could walk without a limp. Physical Therapy three times each week resulted in stronger muscles and a bonus weight loss. It was, of course, temporary. The pounds crept back on and once again, my screaming knee pain got my attention. By now, since I’d been on this roller coaster for 30 years, I couldn’t help but notice that every time I lost weight through diet and exercise, my “norm” was to gain back more. So I reasoned that I was better off doing nothing, rather than repeatedly failing at this seemingly never-ending fight.

Clearly, something was missing and I was filling it with food. After three decades of struggle, I was convinced that there was no hope for me. I didn’t understand back then that a lack of hope is a spiritual predicament, not an emotional or psychological one. I know now that for those who believe in Christ, He is the hope of the world, a higher power to whom those with faith turn for strength. The Bible verse “By myself I can do nothing” speaks to this. With Christ, everything is possible. But I wasn’t a woman of faith in my younger adult years. I’d spent my twenties and thirties refusing to acknowledge God after I walked away from Him at age 14 when my parents divorced. I spent years trying to numb the fond memories of Sunday School, Bible camp and life with Jesus when I was a child and pre-teen. Even in my rebellion, the Lord continued to pursue me with relentless love. I wasn’t yet ready to accept God’s love, or even to love myself in a way that honors God.

In 1998, we moved to Pittsburgh, Pennsylvania, joined “Steelers Nation” and made new friends. One friend, Jane, invited me to church. I refused. Was I still mad at God about my parent’s divorce? Could there be something at church that would fill the void I knew was there? Jane didn’t give up. After two years and numerous invitations, I finally agreed to join her at church. It was an eye-opening experience to say the least. During the service that day, I rediscovered the immense love that I felt as an 11-year-old girl in a Baptist church where I first met and accepted Jesus. I realized what I had been missing: a relationship with Christ. I knew from my experiences with Jesus as a little girl that He loves everyone—even me—no matter our size, shape, state of mind, or what we have or have not done in our past.

I know now that being overweight is a physical problem with a spiritual solution. First, I learned to trust God. God accepted and loved me exactly as I was, yet cared for me and did not allow me to remain hopeless. In 2006, God brought First Place 4 Health into my life. As I learned a new way to place Christ first, my love for the Lord expanded. I learned to listen for and obey His promptings to get to the root of what was causing my weight issue. Every time that God helped me remove a scarred layer from my past, I embraced a new layer of trust in His plan for my life. I crawled, then walked and finally ran free from a life of obesity to one of health and hope, which has given me the strength to accomplish the goals and dreams He had planned for my life. I reached my goal in 2010 and each passing year since then has resulted in learning something new about myself.  I’m not going to mislead anyone by saying that my life became perfect and easy and wonderful. Just like everyone else, I’ve had my share of challenges, but food is no longer my solution to coping with them.

Have you tried everything else? Are you working someone else’s plan or your own plan? Or maybe, like me, you’ve given up and “no plan” is your plan. I wrote about my journey in the book, Restored! Embracing Weight Loss God’s Way to help others understand that there certainly is a “plan” for your life—God’s plan.

BLACK FRIDAY SALE - 30% OFF ALL ACCESSORIES AND SPECIALS. USE CODE: BIG30SALE Dismiss