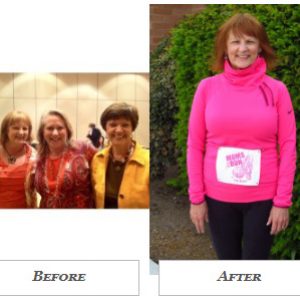 From the time I was two years old, others have said I was a determined person. Determined is a nice word for bossy and stubborn, so I’ve never really considered the label a compliment. Besides, the term didn’t seem to fit my physical profile, as most of my life I hadn’t determined to eat right and struggled with my weight. Even though national magazines have written about my practice of prayerwalking and even though I’ve been on a countless number of radio and television programs about that practice, my weight has been an albatross hanging around my neck . . . and other places!

In July 2012, I reconnected with a fellow writing friend – Carole Lewis, then First Place 4 Health’s National Director – and we did two days of walking and talking on the book convention floor in Orlando. Forty pounds overweight, I was embarrassed about pounds that had crept back on over the previous six years.  Oh, I had lots of excuses: Full-time job teaching high school English (reading essays is NOT an aerobic activity). Part-time business writing and speaking. Four pretty good children . . . and nine perfect grandchildren. And then there was the legal case. Just after my best-selling book on prayerwalking came out in 2001, my rancher husband, Craig,, lost six calves and an old bull to a blizzard that covered them with snow in a dry creek bed. When the snow melted, the animals had died, and a disgruntled neighbor called not us, but animal control. Craig was charged with seven counts of felony animal abuse. Five years later, the case made it to trial. After the judge insulted witnesses, disallowed physical evidence, and refused to allow our chief witness to testify, the jury convicted my husband of six felony counts of animal abuse.  I was devastated that the community, for which I had prayed, would convict my husband. Immediately, I disconnected from my community, a small town in a remote valley in the Sierra-Nevada at 5,000 feet. Over the months that followed, I even would feel sick to my stomach when driving back into the valley.  It took two years for the appellate court to make a decision: The case was reversed. We had won. But my heart for my town was still bruised and broken. And as I determined to comfort myself, the pounds crept back on.

As Carole and I walked the convention floor together, she told me about how FP4H meets four needs—emotions, mind, body, spirit. She explained that I would love the meetings, because I am a multi-tasking woman. I could do Bible study and memorization, fellowship, exercise, and get the support and structure I needed to become a disciplined woman again. “You can do this, Janet!” she said. It took me just a couple weeks to decide to give FP4H a try. As I thought about what Carole had said, I realized that I could take my determination and put it to good use. I would set my mind on pursuing God—not earthly comforts—and let him change my life.

Oh, yes, there was again a list of excuses that tried to talk me out of it. You don’t have time. It takes an hour to drive to Reno. You’ll be too tired to go to church for a meeting on a Monday night. Gas is expensive. After The List had its say, I took stock of my present condition. I was more than 30 pounds overweight. I was out of shape. I was pre-diabetic, and cholesterol numbers weren’t good either. I was also at a point in my life when I  truly wanted my prayers to have effect. Yes, I was still prayerwalking. I was also leading more than one prayer ministry. I had to wonder: “What if my mess of a self was getting in the way of answered prayer?” I decided then that I wanted to be the best I could be—so that others were drawn to God.

I LOVE our weekly meetings. They are SO worth the weekly, long drive. A bunch of us meet early and walk about three miles along the beautiful Truckee River in Reno. Then we weigh in, share our weekly insights and questions, laugh a lot and pray together. It’s the best night of the week, and I’ve made good friends.  I am grateful that Carole Lewis nudged me toward First Place 4 Health. I have lost 43 pounds (two to go!) and am at the middle of my weight range for my height. All of my blood work this year came out perfectly, and aches and pains are gone. I even recently did a 5K and though my friend and I were walking, we beat many of the “runners.”

While you might not be a personal friend of Carole Lewis, you can be assured that she would tell you, “You can do this!” You could determine to beat your list of excuses and become fit, so that God can fully use you for his plan for your life.