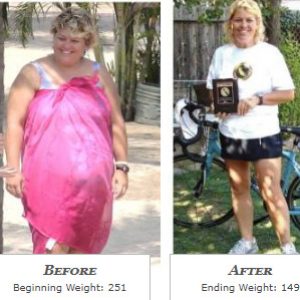 The plaque sat in my lap on the way home from the race and as I looked down on it, I realized it read “First Place”. I knew immediately that I was where I was at that point, 80 pounds lighter, lean and fit, not because of what had had been missing from my life but because of Who had been missing…

Last Monday I spent my morning riding my bike in the Placer County Foothills. If you had told me three years ago I would be climbing 3,000 feet and pedaling 50 miles, I would have never believed you.

My first memory of being fat was at about age 10 or 11. Not fat, I think the word was husky. I wore boy’s clothes and anything baggy to hide my developing body. The next five or six years I was a very ungodly and self-centered teenager. I lived for myself and I also gained the first of many pounds.

I would climb and slide for eight long years. In the midst of all of this, I met a woman, at church, who referred me to her daughter for help with my business. She gave me her business card and on the back wrote the words First Place. I had no idea what those words meant then or what they would someday mean to me. I had reached 251 pounds, ten pounds more than my fat roommate from college and had a 41.5% BMI.

Five years later, our church was having their ministry fair and offering opportunities to sign up for small group Bible studies. I approached the ladies table and began to glance down the list of classes and there it was, popping off the page at me, a Bible study called “First Place 4 Health.” I immediately recalled the business card with those words on the back and actually found it. I signed up as quickly as I could. I had a glimpse of hope, but at the same time signed up in spite of my husband. I would show him that this too would fail. Failure is what I did best!

I hardly remember the first class. I watched the videos and listened to the food plan. I was sure I could screw this up too. I sat through this lesson on a four-sided program. I understood balance from my skiing days, so that made sense. What didn’t make sense was the leader talked about this God that loved and cherished me. She asked me “Do you not know that your bodies are temples of the Holy Spirit, who is in you, whom you have received from God?”

I thought the whole thing was a bit out there but decided it couldn’t hurt to attend. I went home that night and wrote a note to God. No, I poured out my heart to him.

God had a plan for me and answered my prayer. I did lose weight during the twelve-week session. In fact I was the “Biggest Loser.” But more importantly was the healing that was occurring inside of me and the relationship that was being built. I had always known God, but never let him into my heart. The First Place 4 Health program was so simple.  I put God first in my life. I worshiped him and not food. I felt satisfied and full by spending quiet time with him each day. I memorized his words and used them to stand upon in time of difficulty. I allowed him to know me and my innermost secrets. And he allowed me to know Him—His grace, understanding and love. He opened his arms to me, pulled me onto his lap and embraced every bit of my brokenness. What had been missing for so long from my life was right there in front of me. All I had to do was ask for it

It would be easy to end my story at this point. Tell you that I lost 20 pounds during that first session, but the words from my first First Place 4 Health meeting keep coming back to me, “God is equipping me for His plan!” Not my plan but His plan. Now that I had found what was missing, I had to hang onto it. I started the second session of First Place for Health in January 2009, after losing six pounds over the Christmas break.

I remember going home after the first meeting and having a familiar conversation with God. This time, however, I was asking him what I could do for Him rather than asking Him to do for me. He wasted no time in his response. He wanted me to start moving. And so I did—starting with walks that turned into runs, and bike rides that turned into races. I was moving more than 150 miles per month! By the end of the second session I was down another 19 pounds. I wondered,  “Am I finished? Are you done with me? Have I done everything you have asked?”  Summer was quickly approaching and it would have been easy to take a break but God had yet another plan.

Relationship established, body strong and healthy, it was now time to share his good news. I ran into friends and people I hadn’t seen in months and the questions of my weight loss were flying and everyone asked the same question. “How did you do it?” They wanted what I had. Now I had a choice to make. How would I respond? I could have easily said I ate less and moved more, which is true, but my response, which often shakes them is, “I put God 1st in my life and surrendered my fork and my eating to Him” God loves me and has healed me and he wants to do the same for you. I will admit from some I got interesting looks, but it was the truth and I was overjoyed to be sharing with complete strangers that it was God’s love for me that enabled me to overcome the bondage of my weight. I also shared his love for each of them and his desire to know them.

By the end of the summer, I had completed a number of mountain bike races, 5K and 10K runs, found a workout group called Body & Soul and completed my 1st triathlon. My total weight loss was around 70 pounds and as the fall session approached and the one year anniversary of my journey grew closer, I could feel God calling me into a position of leadership. I accepted the call but on my terms. I would  lead in January. Let me tell you something; don’t negotiate with God–He always wins.

Two days prior to that fall session starting, I got an e-mail from our leader stating that we were expecting over 30 women. I did what I now knew best and went to God for direction and clarity. And boy was he clear. I would lead the fitness and nutrition aspect of the program, but I would begin in two days not in four months.  Without hesitation, I agreed but asked him to work through me. I have the pleasure of being a conduit for God. He worked through me by planning the lessons, choosing the small groups, planning the recipes that were shared and gave me the words that he knows the ladies are seeking to hear. I am so humbled, amazed, blessed and in awe of his compassion for me and the ladies in this program.

Never in my wildest dreams did I think I would be in this position. A few weeks after starting the fall Session, I participated in my second triathlon and won my age group. The plaque sat in my lap on the way home from the race and as I looked down on it, I realized it read “First Place”.  I knew immediately that I was where I was at that point, 80pounds lighter, lean and fit, not because of what had had been missing  from my life but because of Who had been missing, and the position that I have placed Him.

Since that October day in 2009, I have made a daily conscience effort to put God 1st. To be his light that shines onto people that needs to know his love. God and I have completed 5 half marathons, one full international marathon, numerous trail runs, too many cycling events to count and an Olympic distance triathlon. We just finished the cyclocross season and every time I step up on the podium I remember how I got there. This coming summer, God and I will ride my bike acrossAmerica in Support of the American Lung Association. I believe that once again he has bigger plans than a 4- day bike ride!

I am constant amazement of how God has worked not only in my life, but in the lives of my entire family. Our special needs son, Joseph, is learning to talk and is doing better and better every day in school. My daughter, Molly, has lost 15 pounds, is actively reaching out to her peers to share God’s love, and is competing in and winning cycling events.  My oldest son, Logan, accepted Christ as his Savior this past Christmas. And, my husband, Martin, who  loves me unconditionally and supports everything I do, including riding my bike across the country, joined First Place 4 Health, lost 50 pounds and is now a Bod4God leader.

Getting fit for God, allowing him to have complete control and accepting his unconditional love is not always easy, even now. We are reminded by God’s words in 1 Corinthians 6:19 & 20, “You are not your own; you were bought at a price. Therefore, honor God with your bodies.” There have been and will continue to be challenges along the way, but with God’s Love, my hope and the support of my family I know that “nothing is missing” from my life!

Update! – Jessica finishes her ride in D.C.  Read about it on our blog:  http://fp4h.blogspot.com/2011/08/once-in-lifetime-experience.html