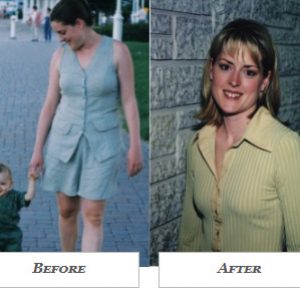 By September 2002, I had lost more than 35 pounds and my new body was a mere bonus compared to the intimacy I had found with the Lord.

My family loves to eat! Whether happy or sad, if we’re together, you can bet food is there. For the first 30 years of my life, I did not realize that I had a problem with food. I was active enough to compensate for what I ate. But after having two children, I found myself incapable of losing the weight I had put on. I tried a number of different diets with little success. I knew what to do, but couldn’t seem to do it. With the pressures of work, being a wife, mother, and daughter as my Dad was dying of cancer, life was out of control and so was my eating.

In the spring of 2002, during a simulcast, Carole Lewis shared how God had proved Himself faithful to her even through the tragic death of her daughter, Shari, on Thanksgiving Day, 2001. I was struck by the fact that this woman – an author, speaker, wife, mother and grandmother – could have such balance in her life in the midst of such tragedy! I needed what she had! So, the next day I bought every First Place 4 Health book I could find. I began reading the Life Under Control Bible study and devoured every page!

Though a Christian for most of my life, I had allowed the Lord to have very little control. I learned more and more about the Lord and His great love for me. I learned that my body is the temple of the Holy Spirit, Who is in me, and that Jesus paid a huge price for me so I should honor God with my body (1 Corinthians 6:19-20). I poured all the willpower I had into studying the Bible, and God faithfully provided the self control to eat well and exercise. It was clear that I was addicted to sugar and that turning to food instead of turning to God robbed God of the opportunity to bless me. Praise the Lord, a transformation was taking place in my heart and body. My hunger for food was being replaced by a hunger for the Word of God and it showed. By September 2002, I had lost more than 35 pounds and my new body was a mere bonus compared to the intimacy I had found with the Lord.

People noticed the change and wanted it too. I started a First Place 4 Health group at my church and we couldn’t keep up with the number of people who wanted to take part. From September 2002 – June 2005, more than 90 women participated in the program and we lost more than 1000 pounds! God is so good!

In August 2005, my Dad passed away. I allowed myself to return to old habits. I was angry with God. Though still leading a First Place 4 Health group, I put on 17 pounds that year. The rising numbers on the scale weren’t enough to catch my attention but, praise God, He broke through to me! God is big enough to handle our anger, disappointments, our grief and our sorrows! He proved that in the good times and in the bad, He is still faithful! He blesses every humble step we take in obedience. I returned to treating my body as the temple and the LORD helped me leave behind those 17 pounds.

In the midst of all of this, through many tests I was diagnosed with Crohn’s disease. Life with Crohn’s means living with constant pain and discomfort. There is no known cure for Crohn’s. On good days, I couldn t sit with my arms crossed due to the pressure this placed on my abdomen. On the bad days, I lay in bed unable to find relief. I lost all energy and often struggled to go up and down stairs.

Whether because the Lord had chosen not to heal my Dad or that I somehow thought I deserved Crohn’s as punishment for years of abusing my body, I realized that I had never asked God to heal me. On February 19, 2007 I was marveling at all the Lord had done for me. That Jesus would die to pay the price for my sins and set me free from the burdens and oppression I had been under was overwhelming. How do you respond to a gift like that – but accept it? I would gladly accept the healing of my body upon entrance to heaven. Why would I not accept it before then? So with fear and
anticipation, I began asking. I don’t want to miss out on a single blessing that the Lord wants to give me!

When we started vacation on June 30th, 2007, I was sick. Would I ever be able to keep up with my family like I once did? On July 2nd, while having more tests to determine the extent of the inflammation, the doctor asked me why I was there and what tests had been used in the diagnosis. I gave him the whole list. He asked where the Crohn’s was located. I told him where all the other tests had pinpointed. He turned the monitor around so that I could see. There was nothing there!

It should have shown up. I had just been sick. I nearly asked the Lord aloud what He was up to! Excitement started to pulse in me! Was I being healed? The next day, I woke to notice that I had no pain or discomfort. With an unspoken question to the Lord, I quit my medication…“let’ s just see.” Praise the Lord that He can work with faith as small as a mustard seed! No pain returned.

My doctor can’t explain it. Not only is there no inflammation but there is no sign of the damage that once was there! “ The Mighty One has done great things for me – holy is His Name.” (Luke 1:49) He has shouldered my grief, bound up my broken heart, healed my body and set me free!