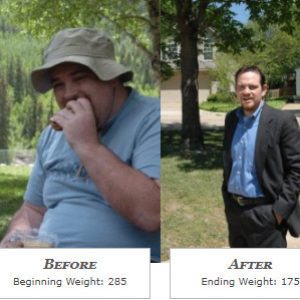 Like many, I was in great shape when I got married. My bride, Tamara, had struggled with her weight from an early age, but I just knew I could change her and I tried. Unfortunately, it wasn’t long before life changes caught up with me and I would steadily gain weight, up to my highest of 290 pounds, joining Tamara at her highest of 320 pounds.

As a former athlete, I thought the “eat less, work more” formula was all that was required to bring balance into our lives. However, after countless attempts with popular weight loss diets and a few of our own, we mutually gave up on weight loss. That was until Tamara discovered First Place 4 Health and committed to attending an orientation at Lake Pointe Church in Rockwall, TX. When the day of the meeting arrived, Tamara had many excuses (including me) not to attend and nearly didn’t. Ultimately, Tamara did attend the orientation and committed to the session of which I passively supported.

Since Tamara and I never had a problem starting a weight loss program, I knew it was just a matter of time before a birthday party, sick child, illness, special occasion, or any one of a hundred situations you don’t plan for would derail First Place. Decision after decision, week after week, Tamara began to change before my eyes.  Starting First Place at 290 pounds, Tamara would ultimately lose 140 pounds. The physical change wasn’t the only thing that caught my attention as Tamara demonstrated a spiritual and emotional maturity that astounded me.

While God worked in Tamara’s life, I struggled with my faith. I grew up “in church” and had experiences that I related to God, but as I aged, I did not develop my relationship with him. I would often think, “if only there was some proof, some concrete example of God, a small personal miracle.” One day, like many in our small community, I was trying to figure out how Tamara lost the weight. It was the same formula that hadn’t worked many times before…and it suddenly hit me, “you wanted a miracle.” God was the missing ingredient in the formula and he was now before me through the testimony created in Tamara. My heart was softened, and I longed to turn my superficial understanding of God into a daily relationship. I joined First Place at the next available session.

I weighed approximately 285 pounds at that time and have since lost over 110 pounds. I followed the nine commitments and the example set by Tamara, but the weight loss became a side effect of balance and a fruitful relationship with God. I am able to do all the activities I used to be able to do, including my favorite sports and some new activities, like run with the kids at the playground and compete in Triathlons with Tamara. Most important, I am able to do what God meant for me by leading my family in a balanced and spiritual manner.