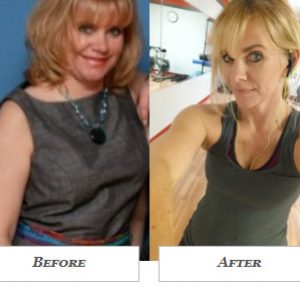 Step by step the changes stuck. I was the girl who hated P.E. Running for fun? No way! Spending time in the gym? Yeah, right! My, how things change when we least expect it. I joined a First Place 4 Health class years ago because a friend wanted to start it. “Fine,” I said, but at that point I wasn’t overweight and didn’t understand that weight loss was only a portion of what it was all about. Fast forward a decade or so—I had gained weight, was tired all the time and tried to make light of it. I used to laugh it off saying, “At 5’2” and 174 lbs., I am undertall, not overweight.” Guess the joke was on me.

The scale tipped closer to the 200 line than the 126 lbs. still proclaimed on my driver’s license. On my smaller frame, it showed. I wore clothes to camouflage the rolls. Instead, the big, bulky shirts and stretchy pants gave me away—I was hiding. But it was more than flesh weight I was hiding: it was sadness, it was addiction to food (mostly sweets and Diet Coke), it was low self-esteem and feeling ugly, it was financial woes. But no one really knew that. Instead, people saw the happy, on-top-of-the-world girl. Yes, I was the confident one, “the go-to gal” for others because they thought I had it all together.

I was singing on the praise team, leading a small group, serving as director of the drama ministry, working full-time, being a wife, mother and daughter, taking care of everyone and everything in front of me—except me. My small group disbanded. Life changes took over their time, and mine. I welcomed the reprieve for a little while.

In the meantime, my husband, Mike, a physical education teacher and varsity boys’ basketball coach, went through his own health crisis. He was run-down, taking three blood pressure medications and could barely get through the day. We ate fast food! Most of our meals came from a box, a bag, the freezer or a drive-through. It was mostly processed foods (full of sugar and fat) and tasty! It was easy and cheap. We were mostly sedentary. Mike played men’s recreation basketball until his legs and ankles got the better of him—too much wear and tear. Plus, his doctor yelled at him about his blood pressure and warned that he was a ticking time bomb waiting to explode. Then another year, another physical, a new doctor! It was a real eye-opener for him.

His transformation began that night. He joined a gym and cleared the kitchen of junk food, replacing it with healthier foods. Subway became our fast-foods; we grilled at home and ate salads. He lost 85 lbs. How? Eating healthy, adding exercise and changing his mindset. It took me a bit longer to get on board.

I was begrudgingly going with him to the gym. I would only go in another city so I wouldn’t run into people I knew. I was embarrassed to be seen. I was afraid I would look stupid on the machines. They looked extremely scary! I was sure that I would fly off of a treadmill, drop a dumbbell on my head or something worse.

Then at a dinner with my co-workers one evening, someone asked Mike how much weight he had lost. “About 50 pounds,” he replied. I immediately turned and looked at him with a shocked expression on my face. “You’ve lost 50 pounds?” He just smiled.  And then my transformation began.  I was still overweight; I was still not in a small group and felt God starting to nudge me. I looked at the groups that were available at my church and nothing fit—just like my clothes. There was a craft group, which didn’t interest me. There was a men’s group. Uh, no! There was a young adult Bible Study, and I didn’t qualify. At the same time I had made huge strides in my own health journey, having lost 40+ pounds and keeping it off.  People at the gym started asking for my help. Suddenly, I was an example of health. I decided to go a step further and became a Certified Personal Trainer through the International Sports Sciences Association (ISSA). I was able to help others by sharing my experience and my new tools.

God soon laid First Place 4 Health back on my heart. I felt his call to lead, not join a group, but was hesitant after the break-up of my last group. I prayed hard and finally surrendered. I was amazed that there was so much interest. We started with 10 people. Then we grew to 13, 15 and 17. Now I have 20 amazing souls sharing their journeys. Our group even hosted a Networking Area Leaders Training Session, and I was invited to deliver the keynote and facilitate a breakout session. God was working in me.

My first FP4H Summit was in 2014. My networking leader and friend, Becky Bergner, had asked me several times to be her co-networking leader for Illinois. I gave her all the excuses, but God was one-by-one removing them. By the time I left Summit, I said yes, and we both agreed to take on Missouri as well. Crazy!

I was already sharing my story with others, leading the wellness program at my job and speaking at churches, associations and other groups. It’s about life balance, and putting Jesus Christ in the center. It’s about the whole person: physical, mental, emotional and spiritual. It’s about accountability to God, self and others. I’ve added Specialist In Fitness Nutrition to my credentials as I continue to follow God’s call and help lead others to a healthy lifestyle.

Lisa is a motivational speaker and writer, leads a FP4H Virtual Group.