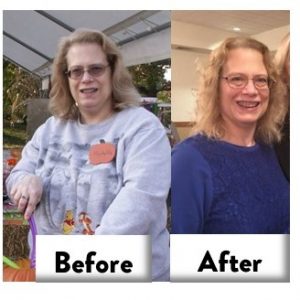 As far back as I can remember, I have always been overweight. From first grade and through high school, I was teased by classmates. By the time I graduated high school, I weighed about 200 lbs.

A few years after graduation, I started on one of those protein shake diets—two shakes a day and one meal. I lost about 30 lbs. and got into a size 16; it seemed to last about five minutes. As soon as I started eating normal food again, the weight came back.

I tried many diets after that time. It was the same scenario—lose weight and then gain it back. I usually weighed around 220 to 245 at the highest into my 30’s. I got married at 36 weighing 245. I tried the Atkins diet with success. This time I lost 35 lbs. and then found out I was pregnant. So, I stopped the diet, the smoking and I stopped drinking (not that I had a big drinking problem). For most women, being pregnant is one of the best times of their lives, if they are ready; I was ready and elated. My husband at that time was not; he did not want any more children; he had three from previous relationships (all girls). This was my first child. My husband was very controlling and mentally abusive. When I found that I was having a boy, he asked me “Who is the father?” In his mind, it had to be a girl since all he had was girls. Needless to say, he provided little to no support. Since I had stopped all of my other vices, the only one left was food and I ate my way to almost 295 lbs., having gained 85 lbs. while pregnant. I was so stressed while I was pregnant that I sought out counseling. I had to stop because I had to have a C-section and a baby to care for.

I started a new job when Matthew was about 6 months old. I was down to 255. The company started Weight Watchers at work; I joined and lost 25 lbs. making me down to 230 lbs.

I finally had enough of my husband’s abuse and neglect, so I asked him to leave. He left two days before our son’s first birthday.  For the next few years, I just worked and took care of my son. When Matthew was about 3 or 4, I knew that we needed to go back to church. I found one through an advertisement and we started. Things were getting better and then I met another man at church; I will just say I made another bad choice. More stress eating led me to top off at 260 lbs. This time I joined Jenny Craig. I lost about 16 lbs.; I had to stop because I could not afford the food anymore.  I was down to 244 lbs.

Fast forward a few years.  After yet another bad boyfriend choice, I went on a salad kick and lost about 20 lbs. Then I joined Christian Mingle. I finally let God choose the man for me because my choices were terrible. It still took a few bad ones to get to the right one. The third person I met turned out to be the ONE. He was willing and eager to take my package deal consisting of my son and me. He is a mailman and said, “he liked packages.”

We had our first date on November 4, 2011, and were married on July 21, 2012. Things were wonderful, except that my Mom’s health was declining. She had been battling colon cancer that had gone to her lungs for the last five years. She was on chemo for four years and could not take it anymore. About a week or so before the wedding, she broke her ankle. I figured that we could just bring her in a wheelchair, but then she got shingles. It was not meant to be. Only God knows the reason she had to miss the wedding.

I was preoccupied with my new husband and adjusting to him moving in. My Mom was in a rehab facility. Around Thanksgiving that year, I had planned to have dinner at her house with her and my new extended family, but she was too ill.  My Dad, husband, son and I went to visit her after dinner.  I would talk to her most nights after work. Then I got a call from my Dad that I needed to get to the hospital. Mom had been taken there and was not doing well. She passed away on December 5th, 2012.

Over the next three years, I gained about 20 lb. and was now at 246 lbs., my starting weight for FP4H. The year before I started FP4H, I had searched for a new plan to lose weight and get healthy. I had tried several different diets before (as mentioned); they all worked, but not for the long term. I always gained the weight back and then some. I did not want to go through the same scenario and fail AGAIN!

In 2015, while in Family Camp at Sandy Cove, I remember feeling that my weight-loss journey was not only for me, but it would also help others who are going through the same thing. I was not sure what that looked like yet, but I was sure it was what God wanted me to do.

I heard about FP4H from Vicki Heath at Sandy Cove. I remember wanting to talk with her about the program. But all I could do was cry. I was ready to join, but I could not find any groups in my area. I met with Vicki for a one-on-one talk and she shared about the online groups. I went online when I got home and found a class to fit my schedule. I believe that it was God’s plan for me to join the virtual group. The registration was supposed to start on a Monday. While I was showing my Dad what I was going to join, the “Register Now” button was active (on Saturday) and I clicked it right away!

I did not tell many people about joining FP4H because I was afraid that I would just fail again and be embarrassed. But God is good! Through the Bible studies and encouragement from the leaders and other members, I have lost the most weight I have ever lost before. God has changed how I look and feel about food. I can have any food I want, but I need to ask myself if that food is really the best choice for me. He is still working on me to be my best self. As of this Thursday (Nov. 22, 2018), I have lost a little over 83 lbs.! I am about 2 lbs. from my goal weight.

I am going to start a FP4H group at my church early next year. My success is not just for me, but to help others obtain their goals in all areas of our being. With God’s help, I will.