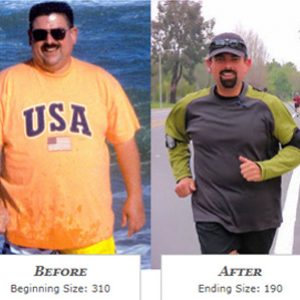 My earliest childhood memories are of a chubby little boy. I remember going to the clothing store with my mom and buying ‘husky’ pants. It didn’t really bother me till I got into Jr. High. I remember picking up a paperback my sister was reading that described an “All Protein Diet.” That was my first venture into dieting at only 13 years old. I lost 30 pounds and maintained that weight loss through most of high school. By college, I was dieting again.

Years later, I got married and began to try various weight-loss programs-Weight Watchers, NutriSystem, Jenny Craig and Phen/Fen. All of these worked and I lost weight, but sooner, more times than later, I gained it back. I made up my mind that I would be fat forever.

My church started a new program called First Place. I remember thinking to myself, “Oh that won’t work; I’ll try Metabolite instead.” Well, I went on the Metabolite while the group started First Place. At the end of the session they announced that the group lost 150 pounds. I thought to myself, “First Place didn’t work for them. That is only 8 or 10 pounds per member.” The truth was that it was 8 or 10 pounds more than I had lost.

Praise God, the next night started the life-changing process of my life. When I arrived, the first thing I had to do was weigh in. I calculated in my head that I would be somewhere around 290 pounds. Of course, I had no idea how much I weighed since I hadn’t been on a scale in years. My beginning weight was almost 310 pounds. I was crushed, I felt like finding a hole somewhere and just crawling in and having a good cry.

My leader got the meeting going and I learned a lot that night. I must have done something right because I lost 13 pounds that first week. That gave my confidence a big boost and everyone was excited about their progress. After a couple weeks I had even started exercising. A couple more weeks passed and I was starting to read a devotional Bible and working on the Bible study. After five or six weeks I had reached my session goal of 35 pounds and was told to keep going. At the end of that first 13-week session I was down 57 pounds.

During the next session I felt a calling to lead. I took over the Bible study for our class and at the end of that session I was asked to give my testimony at the upcoming orientation. I was terrified, then I remembered that the old Mark was gone. God changed all that through the First Place ministry.

I wish I could say that I’ve kept all 120 pounds off, but the truth is that the “lifestyle” part of the program has taken years to sink in. Over the next couple years I gained back almost half the weight I had lost. Circumstances at the church had changed, the two co-leaders left the church and I became the lone-leader. I let the program operate in autopilot and didn’t really put my all into it. Then last January I decided that if I’m going to lead, I need to do the best I can. God was gracious and gave me a great group to encourage me as I led and encouraged them. I’ve lost 25 pounds so far this year and that is a step in the right direction.

At the Leadership Summit I picked up Carole’s new book, Back on Track, and read most of it on my flight home. That following Monday I began the Triple Dare and I am so excited about the changes that God is making in my life again. I know I’ll take the rest of the weight off now that I’m back on track. I’m praying that this time I’ll keep to my new habits instead of falling back to my old unhealthy habits and I’m confident that God will see me though.

Last Spring I challenged my group to find a life verse. I decided on 1 Corinthians 9:24, “Do you not know that in the race all runners run but only one gets the prize? Run in such a way as to get the prize.” A couple of weeks later God gave me another verse Philippians 3:13; “Brothers, I do not consider myself yet to have taken hold of it. But one thing I do: Forgetting what is behind and straining toward what is ahead.” I love those verses because they give me hope for tomorrow. I need to forget about my past: my old eating habits, my lazy attitude, my selfishness with my time… and strain toward what is ahead: good health, a rich relationship with Christ, a long life of service to the Master and I need to run the race to win, and that means being the best First Place leader and member I can be.

I thank God all the time for First Place, for those leaders who years ago started this program, for those in leadership now that keep the program moving, for my leader, Georgetta, who encouraged me to get going and later to lead, and for those who I have the privilege of ministering to. First Place changed my life, it took my broken spirit and restored hope and gave me a bright future.