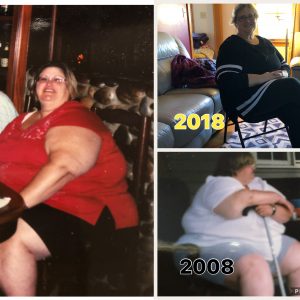 I’ve struggled with weight my whole life. At birth, I weighed 9 lbs. 9 ounces. I was the largest baby with a full head of curly brown hair in the delivery unit, and my dad said that everybody wanted to see me. When I got older, people would tell my mom “Oh, it’s just baby fat…she’ll lose it someday.” But by the time I hit 13 years old, my mom stopped believing that lie and actually had me join my first “real” diet…Weight Watchers.

So, Weight Watchers was my first official “diet” and I’ve probably quit and re-joined WW about 10 other times throughout my lifetime, not to mention being on every diet known to man, only to lose weight, gain it all back, and then gain some more. I even looked into gastric bypass surgery in 1999, only to be told I was not a candidate. I had Crohn’s Disease. And again in 2008 for the Lap-Band surgery, to be told again that I was not a candidate for that either. I was too big!

As I look back now, my health journey really started that year, back in December of 2008. I weighed in at the surgeon’s office at my heaviest recorded weight of 454.5 lbs. I was on 12 different medications each day for high blood pressure, high cholesterol, GERD, depression and anxiety, 55 units of insulin for uncontrolled diabetes, had major mobility issues where I needed to use a cane every day, and ultimately used a wheelchair if I had to go any significant “short” distance.

The surgeon said if I was able to lose a decent amount of weight, then he might re-consider the lap band surgery. So, with limited mobility, on 12 medications, and severe metabolic issues, and the only way to lose any significant weight was by being put on a medically supervised modified liquid diet consisting of 750 to 900 calories per day. I managed to lose 50 pounds during that 12-week protocol. After that, I had to transition to an “all foods in moderation” group and lost another 25 lbs. or so.

It was during this same time, in March of 2009, that I attended a Spiritual Life Weekend at my church where we had a guest speaker. By the end of the weekend, I was so moved by what was being preached, that I walked up to the guest speaker and said…“Pastor Judy, I really believe that God wants to use me in a big way helping others lose weight, but I have no idea what that even looks like.” She said four words to me, “First Place for Health”, then proceeded to say that she didn’t know much about this ministry, but that her mom had been active in it and had lost 75 lbs.

So, I went home at the end of that weekend feeling a little more hopeful and immediately got on the computer and researched what FP4H was all about. I liked what I read, and as I was a Deacon for Women Ministries at my church, I ordered the leader’s kit with the intention of starting this ministry at my church. By the time the leaders kit came in, I was so overwhelmed with all its contents, I packed it all back up, where it sat on my shelf for the next 7 months.

I did, however, manage to find an active FP4H group in my area and I contacted the local leader. Eventually, I started their next session, and before you knew it, I was taking a 6-hour road trip with a bunch of women I didn’t know to Pittsburgh, PA, attending an “FP4H Change Your Life Event”.

So, by January of 2010, I launched this ministry at my church. I had already lost about 75 lbs. on the medically supervised plans and was excited to lose even more weight. Well, I led this ministry at my church for three years, and I never lost another pound! You see, God had other plans and needed to do a much bigger work in me. The miracle, though, was that I was able to maintain what I had lost. God knew what He was doing because I needed to be in that leadership role. It kept me transparent, accountable, plus I had to show up each week. I was the leader – so I had to show up.

My life verse during those years was Matthew 11:28-30 – “Come to me all who are weary and burdened and I will give you rest. Take my yoke upon you and learn from me, for I am gentle and humble in heart, and you will find rest for your souls. For my yoke is easy and my burden is light.” I held on to this verse so tightly…every word.

FP4H got me through witnessing my sister battle tons of weight-related diseases, which ultimately cost her, her life. She was my best friend and biggest cheerleader in life. I snapped. I had reached the end of my rope. I no longer had the strength, hope, or capability to lead FP4H, and no one else in my group felt the call to continue with the ministry. So, after three years, it ended. In the midst of such great grief and loss of hope, the weight started rapidly coming back on – once again reaching well over 400 lbs. I was completely broken. I had given up on any hope of recovery from my own major health issues, and sadly, I also gave up on God’s promises. I just got bigger and bigger plummeting back up to 417 lbs.

One day, in the summer of 2016 while sitting at my desk, I came across a short paragraph in my local newspaper. The surgeon that I had inquired weight loss surgery twice in the past was working in conjunction with our local hospital to open up a new Weight & Wellness program. I read there was an upcoming information session, and even though I knew I didn’t qualify for surgery, I still wanted to go and see if the surgeon would remember me from the past.

Well, he didn’t remember me, but at this meeting, I learned about a newer, less invasive bariatric surgery that was being performed. One that I would actually be a candidate for. After this meeting, I remember sitting in the parking lot of the hospital for what seemed like an eternity and cried and cried. This time, though, the tears were because for the first time in a long time, I had a glimmer of hope.

The first thing I did when I got home from the meeting that day was call my pastor for spiritual guidance and prayer. The second thing I did was sit my family down and explain to them this new surgical procedure and wanted to know if they would support me with this decision. My family was completely on board, and my oldest daughter said to me, “Mom, I’ve watched too many family members die, and I don’t want to watch you die too.” So, I proceeded forward with Vertical Gastric Sleeve surgery on October 28, 2016.

Not quite a year later, I was approached by one of the women from my old FP4H group. She felt God’s calling to re-launch the FP4H ministry at our church again and wanted to make sure I would be OK with that. I think I totally surprised her, because I was so excited about it, and told her that I would love the opportunity to assist and co-lead with her.

One thing I need to stress, and honestly it sometimes still bothers me today, there are some people that say I took the easy way out. But I need to attest that surgery is certainly not the easy way out. Everyone has to walk their own path and for me, that path was bariatric surgery, completely orchestrated in God’s perfect timing.

Well, Vicki Health contacted me and asked if I’d be willing to start a new virtual group meeting geared toward post-bariatric patients. They had made a decision to branch out the ministry in this new initiative, which will launch in January of 2019.

Let’s face it, we ALL need Jesus…and for me, I know that I cannot continue to live this life without Him being in first place. I am excited and anticipating to see how God will continue His work, and I am truly blessed to be a part of this new initiative. I give Him all the glory