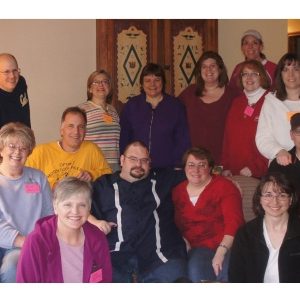 At the Hope 4 You event in Brookings, SD in Sept 2010, Mike sat in on one of Carole’s breakout sessions where she shared the idea of having a goal of tracking your exercise by “walking” to “someplace” as a group.  When we returned from SD to our group in Rochester, we initiated a challenge (at the time we had 18 members and would split into two groups for bible study).  We challenged each group to pick a location somewhere on the map that would be a fun location to “walk” to and that would also be an achievable goal.  The members kept track of their exercise each week and then we recorded the progress as one team “walked” toward Disney World and the other “walked” toward San Antonio, TX.

During our winter session, which started in Jan of 2011, we had a few less members so we stayed together as one group and decided to “walk” to Haiti.  One of our members, Linnea Aaland, has a missionary brother in Haiti and we decided to focus on, and pray for his mission and the people of Haiti.  The Sunday after we decided to “walk” to Haiti, our church announced that a team of about nine people from our church would be sent to Haiti in late April 2011 to build the first house on a 30 acre development.  Coincidence?  We think not!  I ran right up to our pastor organizing the mission trip following the service that Sunday and shared with him about our “walk” to Haiti.  This conversation sparked the idea to put on a 5k/10k walk/run and 25k bike on April 9, 2011 to raise funds for materials to be used for the construction project in Haiti.  We are happy to report that just under 200 people participated in the Hope For Haiti walk/run/bike which raised over $6000 for the materials that will be used to build the house in Haiti!

It gets even better though!  Mike and one other member from our FP4H group are two of the team members headed to Haiti on April 26th!

So far, on our return trip from Haiti, we have logged 711 miles and are somewhere in the middle of the Gulf of Mexico headed your way!  At the rate we are going we anticipate “arriving” in Houston sometime during the first week in May.  We will then continue on toward Rochester, MN hopefully in time for our Victory Celebration the week of June 6th.

Thanks for planting the seed that has led to our trip, both figuratively and literally, to Haiti!  We are so glad to report that that seed landed on fertile ground and we are excited to see just what bountiful harvest God has planned.